Build a Learning Organization: Embedding Failure Into the Culture

For the longest time business and military leaders wouldn’t dare utter the word failure in front of their organizations.  For many the credo was that failure wasn’t an option.  Times have certainly changed but many organizations are just scratching the surface in addressing the difficult issues surrounding failure.

The following is an article that was published on the FailCon Blog.  FailCon is a one-day conference for technology entrepreneurs, investors, developers, and designers to study their own and others’ failures and prepare for success.  This year I will be facilitating a discussion at the FailCon Conference in San Francisco on October 21, 2013.

Failure has become a pretty hot buzzword in many business publications and blogs.  In fact, it is hard to find one that hasn’t suggested to: fail early, fail fast, fail often and of course the rebranded fail – To Pivot (See The Lean Startup).  While all of these ideas are in the right sentiment we need to dig a little deeper or we will miss the entire point.  Organizations need to go beyond encouraging employees in purposeful risk taking and possible failure.  They need to create the systems, processes, and tools that will address failure when it does happen.  When organizations neglect to recognize that failure is an option or are not prepared to address failures proactively they discover that these failures always end badly.  This doesn’t have to be the case. 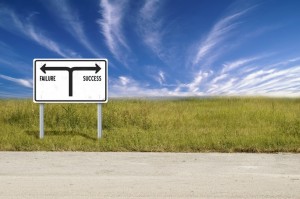 The fact is that large companies are political bureaucracies by definition.  There are always a few exceptions but most are being run through a century old model of command and control management.  Early management philosophy came out of military doctrine where it was necessary to coordinate the complexities on the battlefield from the generals down to the privates.  It was by intent that the strategy would get broken down by the leaders into actionable tasks for the troops to carry out their mission.  From the beginning, the mission always took precedence over the men.  A single man could fail but the unit was expected to succeed in accomplishing the mission.  We have repeatedly heard military leaders order “We must be succeed in our mission – failure is not an option!”

As a rally cry “Failure is not an option!” makes for a great tool to motive the troops but it couldn’t be farther from the truth.  In reality that particular mission may or may not have been important, that particular battle may or may not have determined the outcome of the war but failure was always an option.  In every single one of those wars there were hundreds if not thousands of “failed” missions.  In fact, the military has recognized that failure is such a likely outcome that it has created a process to identify and learn from failed missions, it is called the After Action Review (AAR). (See Veterans Day Lessons)

All branches of the U.S. military use some form of an AAR process to analyze what happened, why it happened, and how it can be done better next time.  The AAR is focused on creating a clear comparison of what were the intended results versus what were the actual results.  By understanding what happened the military can adjustments in their future planning.  In 1990, Peter Senge coined the terms “Systems Thinking” and “Learning Organization” to describe how organizations can study action-reaction feedback loops to better learn how to solve their own problems.  When an organization makes a plan, executes the plan, and documents what they learned they are completing the system.  When they instead attempt to cover up their failures they are short circuiting the system and failing to learn from the feedback loop.

For most of the last decade I worked for the consumer electronics giant, Best Buy.  During much of this time we were keenly aware that we couldn’t endlessly grow more stores in our U.S. market.  We were reaching what we thought was a saturation point in our number of stores.  A priority for the organization was to find new growth opportunities.  Over those years I saw us launch dozens of new business initiatives.  Most of them ended in failure but the failures weren’t from ineptitude.  Frequently the teams had done good work but the initiative didn’t move forward for any number of reasons.  Maybe the organization wasn’t yet capable of operationalizing the initiative.  In other cases the customer wasn’t ready for the changes that we had created.  With one particular initiative the regulatory environment first needed to change before it could be successful.

These initiatives had successfully explored new opportunities but they just weren’t ready to move forward.  They had “failed” to reach their objectives but they weren’t “failures” in the pejorative sense of the word.  The challenge is when an organization doesn’t differentiate between the two they usually end up with the latter definition and the negative stigma that goes with it.

Most business scorecards remain pretty similar to the academic report card.  Get more A’s and you get recognized in a good way but get more F’s and you get recognized in a bad way.  In business you get compensated and promoted based on your successes.  Failures can cost you your promotion, your bonus, and even your job.  With this equation it is easy to understand why leaders would prefer to quickly kill a project and cover up their failures but the result is that the organization never really learns from it.

When an organization neglects to formalize their expectations of addressing failures they are sanctioning the individuals to cover them up.  As we reviewed with the business scorecard, if you leave it up to the individual they are personally incented to cover up their failures.  Each of these initiatives had a cost to the company in time and money.  It is up to the organization’s leaders to create their expectations for the systems, processes, and tools that will be used to learn from their failures.

In 2007, I created one such tool at Best Buy.  I started an internal series of Failure Forums to openly address our failed initiates.  It was a venue open to all employees where initiative leaders would share their story: what had they accomplished, what had their learned, and what would they have done differently.  We kept the presentation sessions intentionally brief so that we had ample time for questions from the audience.

To be a learning organization you first need to admit that failure is an option and then build the necessary systems, process, and tools to address and learn from your failures. In my follow up article I will share my lessons learned and some of the best practices for starting Failure Forums within an organization.