With a new year brings the annual cycle of personal New Year’s resolutions.  Frequently these resolutions include losing weight, reading more, spending less, or getting more involved.  Many of us want to change from our current course to something that is more desirable but statistically 88% of the time we will fail at our resolutions.  Oftentimes failure comes early in that we say we want to make changes but we never even take the first step.

This article is about two individuals who resolved to get more involved to in their local communities.  Knowing that the odds of winning their first campaign for public office were against them they proceeded in taking that first step and registered as candidates for their respective city councils.  Chad Bell and Emy Johnson wanted to shared their stories of failure and success in an effort to encourage others to take the first step to get more involved.

This article originally ran on January 15th in my monthly column Facing Failure for the publication Pollen: 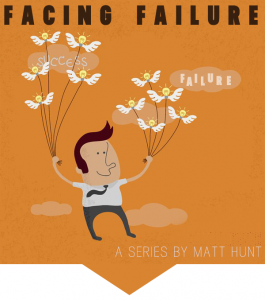 Stories of Two Candidates Who Wanted to Make a Difference

With the New Year upon us, many will be formulating their personal resolutions. As the years have passed, I hear more friends and colleagues committing to get involved in order to make a difference in their community. I am continually amazed by those who take their desire to create change or serve their communities and run for public office. Having worked on campaigns in the past, I have seen firsthand the effort and the toll that running for office takes on the candidate and his/her family. Knowing that the odds of winning an election can be low, these candidates proceed in putting themselves out there because they believe that they have something to offer and that they can make a difference.

This is the story of two candidates, who in 2012 both ran for their respective city councils. One ended in success and their other ended in failure. The goal of this article is not simply to compare and contrast but to provide those who might consider running for elected office transparency into their journeys. While both candidates were interviewed separately, it was remarkable how similar some of their responses were.

Both candidates have been active volunteers in their community and both had participated in the Policy Fellows program at the University of Minnesota’s Humphrey School. Emy Johnson won her race for Shoreview City Council against five other challengers for only two open seats. Chad Bell lost his race for Edina City Council against three other challengers for two seats that were held by incumbents. Knowing that it wouldn’t be easy, they both were willing to throw their hats into the ring because they wanted to make a difference. These are their stories.

Q: What motivated you to run for office?

Emy: There were many things that led me to pursue a run for office. I’d been actively involved in my local community already and had served on committees and boards, but I wanted to be in a position of making a greater impact. I felt that if I were to be elected to serve on the city council, I would get a chance to serve more broadly and use what I had learned from my professional life in service for the greater good. Several members of my family spent their lives making a difference in their community and public service wasn’t necessarily an elective or an option—it was just what you did, what you should do.

Chad: I always had an interest in politics and got exposed to it in college when I was on the all college council. But for me it came down to the fact that I wanted to serve the city. I have lived in Edina for over eight years and I thought I could bring a perspective and skill set that would be helpful. Also, I thought it would be an enjoyable experience.

Q: Some people might say they are interested in running for office but they never do. What was it that motivated you to follow through and register as a candidate?

Emy: Moving from the idea of public service to running for the position came about as a result of the effect numerous mentors had on my life. I was encouraged to have compassion for people and their issues and challenges. If you care about people, you want to help them, but you have to be in a position of leadership to do something; you can’t just sit back.

Chad: I told myself that if I was really serious than it was time to stop talking and start doing. I also got motivation from the time I spent in the Humphrey School Policy Fellows program. It had awakened the interest I had around public service and getting more involved.

Q: Did you think about your chances of success as you stepped forward? Did you know how many other candidates were running at the time?

Emy: Since this was a new arena I was stepping into, there was certainly a fear of the unknown, but I was excited too! I found out quickly that I was one of six attempting to fill two seats on the council, and I knew that it would require hard work and dedication to separate myself from all the other candidates. Although I was already actively serving in the community, I realized I needed to grow my relationships with residents and business owners, to embrace the history of the city and grow that legacy. If I could do this, I could succeed.

Chad: There were two seats up for election and two incumbents were running. Both were formidable candidates with longstanding community ties. Honestly, I knew my chances were long but I did not want to use that as an excuse. Waiting for the “right time” seemed like a cop out to me. If I was serious I should get involved and do it now.

Q: What was the most enjoyable piece of running for office?

Emy: My favorite part of running for office was meeting and interacting with such a diverse audience—from children who attend our schools to parents who are raising families. One woman I met at Johanna Shores Assisted Living had been born and raised in Shoreview and had raised her own children there. The stories and life histories I encountered were inspiring.

Chad: Meeting people and listening to what they had to say. It was interesting and enlightening. I never got tired of that.

Q: What was the most difficult piece of running for office?

Emy: I was really challenged by trying to be in two places at once, maximizing the time I had, and negotiating social media with my marketing director (in this case, my sister-in-law who was pregnant at the time with her fourth child). This is the reality of running a campaign—pulling together a staff consisting of a retired neighbor, a father-in-law, a pregnant sister-in-law, and two teenaged children along with countless other volunteers and supporters.

Chad: Having people tell me they really liked me as a candidate but were not going to support me due to their relationship with the incumbent candidates. I tried to remain upbeat during the campaign but have to admit that was disheartening.

Q: What did you find most unexpected about running?

Emy: The amount of people—even perfect strangers—who rallied behind me and showed support early on, trusting my abilities and my vision to lead them. I found myself in awe of the trust they placed in me.

Chad: How much fun it was and how little connection to the town I had. During my eight years in Edina I thought I knew a lot people and had a wide network. I had to admit that I was naive to think that was enough.

Q: Was there ever a time during the campaign when you felt as though you knew how your race would turn out?

Emy: No. I truly had no idea if I would be the winner. Even though I started the campaign on the premise I would win, there is a big gap between the idea and the reality. Were people getting to know me? Did the community understand the dedication and hard work I would bring to the position? Did they realize that my heart truly was in serving my neighbors, my city of Shoreview? I had been coached by many and understood that most candidates lost their first elections. The first time you run for office is more about the experience of getting out there and growing your confidence in public service than winning the position.

Chad: After my first community debate when I got feedback from so many folks about how much they liked my candidacy but that were not going to vote for me. It was tough. It felt like I was not going to get into the club no matter what. Personally I wanted to see it through and give my best effort. I didn’t want to have regrets and I didn’t want to stop fighting.

Q: Emy, how surprised were you when you won?

Emy: The evening of the election, I had invited all of my supporters, friends, family, and even fellow candidates to an election reception at a local business as a way to express my gratitude. I think the moment when a supporter, and now friend, came running in with the results from just one precinct, stopped me dead in my tracks. His excitement as he ran over to me with the news, announcing me as the winner of that precinct, affirmed that my hard work and commitment had actually paid off. I was simply stunned.

Q: Chad, how has losing your election changed your goals?

Chad: It has not changed my goals, but it has solidified what I need to do next time to have a better chance to win. I need better organization and to be stronger with my clarity of vision when explaining why I was seeking the position. I had chosen to run my campaign by myself and it was a significant amount of effort.

Q: What advice would you give to others who are thinking about running for office?

Emy: Do it. The experience is incredibly rewarding and our society needs people who believe in the common good.

Chad: Do it and don’t wait for the “right time.” It takes a lot more courage than I thought it did. It’s humbling but also rewarding…even in defeat.

Q: Were there any people or resources that helped you along the way?

Emy: I was certain that running for public office would require backing in every corner. I was incredibly blessed to have support from individuals who helped with marketing, social media, door knocking, donations—essentially an army of supporters, willing to contribute in different ways and who believed in me.

Chad: I had made a few strong connections with voters who after hearing what I had to say went out of their way to help my campaign. Looking back, though, I realize that I would need more support if I was going to be able to win.

Will this be the year that you make your resolution to run for public office? Building a strong civic-minded community takes candidates who want to make a difference and who are willing to throw their hats into the ring. It does take time and effort, but whether you win or lose, you will survive. I want to thank both Emy and Chad for sharing their candor and insight. We are lucky to have such qualified candidates!

Connect with Emy Johnson on LinkedIn, Twitter, or her blog www.emyjohnson.com.