Back in 2011 I was researching the topic of failure within businesses and came across the story of Jeff Stibel, the CEO of Dun & Bradstreet Credibility Corp.  Jeff had written an article for HBR titled “Why I Hire People Who Fail” where he had described how he created a “Failure Wall” within the company.  Jeff sees failure as a great way to learn how to succeed and personally he had always felt that he learned so much more from his failures than from his successes.  When Jeff would recount his successes he was never sure if they were just good luck but with failures he knew where things went wrong.  One evening while he was celebrating a one of his company’s successes Jeff had gotten an idea for how to shape the company’s culture towards failure.  He went in into the office that night and with the help of his assistant he set out to create a Failure Wall.  They picked the biggest wall that they had, painted it white, and then started stenciling some of their favorite failure quotes.  Employees returning the next morning were encouraged to use a permanent marker to write down one of their failures, comment on what they had learned, and put their name to it.  Jeff led by example by sharing one of his personal failures – he felt that he and his wife had waited too long before starting to have children. 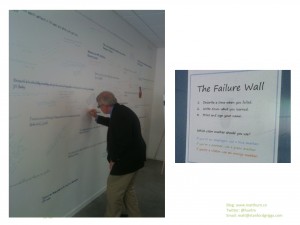 This morning I had a chance to talk with Jeff a little more about how he has tried to create a culture within the organization that can not only tolerate failure but embraces it as part of the learning process in driving the business forward.  In the interview, Jeff describes his own continued struggles (i.e. failures) as a leader on when to get involved and when to let his team address issues.  He talks about the fine balance between tolerating necessary failures, or calculated risks, and those decisions that could put the company at risk.  Jeff takes my last question how to institutionalize the knowledge of our failure to share the insight that his company has found by using the annual review process not just as an opportunity to talk about individual’s successes but also to talk about their failures.

The interview with Jeff is quick so take a 10 min break to watch and let me know what you think (YouTube Link).  Note: the recording was a few seconds delayed.