Most leaders want their organizations to be innovative but just saying it isn’t enough.  If they want their people to take risks and innovate they have to create a culture that can support and endure the ups and the downs of driving innovation.  Driving sustained innovation requires the right people, processes, & tools.

In a recent discussion with human resource professionals we examined how one of the most used tools to evaluate “employee performance” was fundamentally flawed. By not taking into account the difficulty of the work the “Nine Box” performance management tool was misrepresenting top performers and killing innovation. 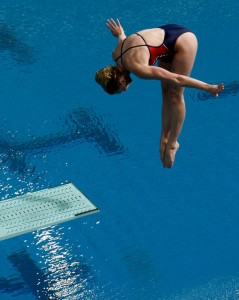 As the end of the year approaches many organizations are going to be plodding through their annual employee rating process.  A common tool for coordinating this work is the Nine Box Talent Management grid.  With this tool every employee is placed into one of nine boxes along two axes (usually Potential and Performance) for the purpose of rating and ranking them.  The results of this ranking can be used to determine bonus payouts, promotion eligibility, or succession planning.  Having used this tool for over a decade, I can say that it is great in its simplicity but it is fundamentally flawed.  It doesn’t take into account the difficulty of the work and it over rewards superior performance of low risk activities.

A quick analogy from the sport of competitive diving can help make this point more clear.  Before the diver takes to the platform each dive has already be rated with a degree of difficulty.  The degree of difficulty rating determines the maximum and minimum point range that can be achieved for each dive.  If two divers perform their different dives equally well but one has a higher degree of difficulty then that diver will receive more points.  If you choose to go for the dive with the highest degree of difficulty and perform it well and you can take home the gold medal.  But if you make a mistake on that difficult dive you can still achieve a higher score compared to those with perfect dives that are less difficult.

What the Nine Box lacks is the ability to evaluate the difficulty of the work when it compares employees across roles and business units.

The Director of Human Resources for a company with 9000 employees recently shared her organization’s challenge with the Nine Box rating system.  What they found was that “top performers” who were in the A1 box sometimes struggled when they took on especially challenging projects.  The organization’s leaders had noticed that there was a strong correlation between when the project struggled and when the employee struggled.  Subsequently these star employees would get a dramatically lower rating on their next Nine Box review. 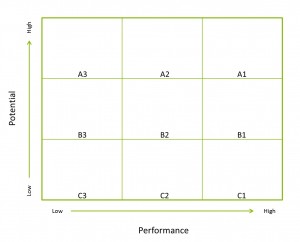 But had this individual really changed?  Had they intentionally let their work “performance” drop off?  A more likely scenario was that the rating system was misrepresenting the difficulty involved in their latest project?  Unfortunately their struggle with the project was also diminishing their perceived potential.

In my time at consumer electronics retailer Best Buy I watched us mistakenly use this tool across job levels within the organization to the detriment of our employees.  We were comparing individuals responsible for running a stable “core” business with others that were responsible for launching a new product category.  The degree of difficult was vastly different in these roles but it was not factored into the equation.  The downgraded ranking would leave the risk taker to wonder if their innovation work was worth the price.  To protect their own self-interest many employees chose instead to outperform in roles that were more certain and stable.

If your organization wants to drive growth through new products and services you need to examine how your internal systems and tools are manipulating the risk vs. reward equation for employees.

Building new products or services will involve many unknowns and inherently will have a higher degree of difficulty.  If you want your best employees to continue to take on these risky initiatives you need to ensure that your performance management tools are able to evaluate them accurately based on the degree of difficulty.

One reply to “Risk Taking, Failure, and Performance Management – Shortcomings of the Nine Box Tool”