Apple Pulls the Plug on Ping

Even the mighty Apple misses the mark on occasion. John Paczkowski (@JohnPaczkowski) of the tech blog All Things Digital cited sources close to the situation as suggesting that Ping will be gone with the next major release of iTunes in the Fall. The plug is being pulled on the “test” after less than two years for Apple’s social “music” network when it debuted on September 1st, 2010. Instead Apple has stated that it will focus on partnerships with Twitter and Facebook to better integrate into their dominant social webs. 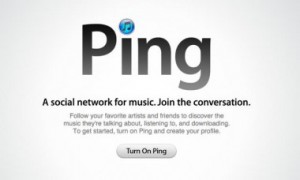 Originally, just hours after the service launched it was heralded as a success with Apple sending out a press release stating that they had registered over one million Ping users in the first 48 hours. But not everything seemed right and soon the questions came flooding in about fake accounts being created, including singer-songwriter Ben Folds who claimed that an account had been created in his name but he had no idea who had created it. At the time Apple had also confessed to a major blunder with their Facebook integration. The integration between Ping and Facebook had originally worked but Apple had failed to secure an agreement before they launched Ping. Job’s cited the fact that Facebook wanted onerous terms that Apple could not agree with and so in response Facebook denied Apple’s ability to use the Facebook API with Ping.

The solution that Ping was trying to deliver was to help customers search for new music based on what their friends had bought on iTunes. But Apple didn’t know who your friends were based on your iTunes account so they were looking to leverage that information from your Facebook account. Where is all broke down was that Apple failed to have finalized an agreement with Facebook and without it their product didn’t solve anything for the customer. Hence why Doug Gross (@Doug_Gross) from CNN included Ping is his list of “10 Biggest Tech Fails of 2010”

One reply to “Apple Pulls the Plug on Ping”

Leave a comment. Comments from first-time registrants are moderated.
Next entry »