The Importance of Finding Your Tribe

Have you ever looked around a room and thought to yourself, “This is my tribe!”  I just had the good fortune of having that feeling last month when I attended my second Business Innovation Factory Summit, BIF for short.  This is the 11th year that host Saul Kaplan (@skap5) and his cadre of BIF-zites have hosted the two-day summit in Providence, Rhode Island.  Unlike most other conferences that host speakers with their canned presentation, BIF instead chooses to focus on unique storytellers.  These storytellers share their ideas, their insights and their personal journey in an attempt to change the world in their own way. 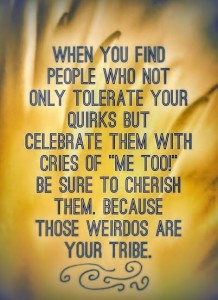 when I participated by watching a live stream of the event.  I immediately loved it!  There were authentic people sharing their authentic stories.  When people ask me what the difference is between these storytellers and speakers at your average event or conference I suggest that it all has to do with the expectations set by Saul and the audience.  They have come to expect authenticity, vulnerability, and passion.  They expect BIF storytellers to leave a piece of themselves on stage.  Not all of them succeed but that is the expectation.

Saul kicked off this year’s event by sitting on a stool in the center of the stage and addressing the audience.  He suggested that we were all “innovation junkies.”  He was suggesting that collectively we see the world with a similar perspective – we want to improve it.  Not that we all have the same vision of how the world should be but that when we see something that isn’t working quite right our initial reaction is to think of how it can be improved.  Often these innovation junkies will feel compelled not to sit idle but to begin working of how they might participate in changing things.

Based on my discussions with other attendees it sounds like Saul was able to depict most of us with one broad stroke.  That is why I fell in love with this conference and the other attendees.  They are my tribe!  Like me, they see something that is off and they want to make it better.  They are activators, not patient enough to sit by and wait for someone else to get around to fixing things.  They may not always be moving mountains but they are changing the world in their own way.

I wanted to share with you one of my favorite story tellers from this year’s event – Jeff Sparr, the founder of Peace Love Studios.   Jeff suffers from a painful form of mental illness, Obsessive Compulsive Disorder (OCD).  This disease is in constant battle with Jeff seeking to destroy any moments of his happiness.  Jeff shared one of his most painful bouts in his battle with the audience.  It involved a moment with his son that should have been sheer joy – but it wasn’t.  Through Jeff’s struggles he took up painting as a way to relieve stress and clear his mind.  For him the distraction worked and it gave him a sense of control.  Rather than keeping this discovery to himself, Jeff wanted to share it with others who were similarly suffering with OCD and mental illness.  That was when he created Peace Love Studios as a vehicle to help others.  As of today the organization has had an impact on over 19,000 individuals.  Take just a few minutes to watch Jeff’s story and learn about how he and his tribe are making the world a better place. 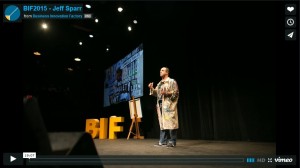 Jeff was amazing and his story was incredibly inspiring but his was just one of many powerful narratives.  Over the next few weeks I will share with you a few more of my favorite BIF storytellers.