Creating Common Language: The Important Difference Between a Failure and a Mistake

With so many people preaching advice on failure these days (Fail Early, Fail Fast, Fail Often) I thought it might be worth trying to clarify the difference between a failure and a mistake.  So often the media loves to amplify the drama surrounding failures by highlighting all of the negative connotations.  Words like nosedive, bomb, flop and collapse are frequent synonyms used for failing and each one tries to convey the severity of a failure that may or may not be appropriate.  By working toward a common definition we may be able to short circuit the negative implications and fear that many people have with the word failure.

A failure is when something that you were trying to accomplish
fell short of what was required or projected.

In this context there is a very subtle distinction between a mistake and a failure that is worth pointing out.  A mistake is an incorrect, unwise, or unfortunate act or decision.  A mistake can be caused by bad judgment, a lack of information, or a lack of attention to detail.  While a mistake can lead to failure they don’t always have to end in failure.  We make numerous mistakes every day of our lives without serious consequence.  We would prefer to avoid making mistakes but without perfect attention and perfect prediction they are inevitable. 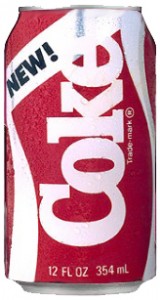 Some of these failures fall within the responsibility of the individual or the company but many of them do not.  Sometimes you can run tests against these criteria in order to make changes and potentially avoid the failure but depending on the product or service that’s not always possible; see my post on Disney’s failed launch of The Lone Ranger.  Another great example of this phenomenon was with the launch of New Coke.  Every sign from their test marketing pointed to the idea that most consumers in the United States liked the new sweeter flavor of New Coke but a small cadre of loyalists made a huge roar when the company wanted to change “their” product.  In this case the few outweighed the many but it highlights how even a sure thing can turn into one of the most spectacular product launch failures ever.

My point is that failures don’t always stem from mistakes and sometimes they simply cannot be avoided.  I would prefer that we call them what they are, failures, and that we get more comfortable talking about them so we can move away from fearing them and hiding from them.  When we hide from our failures we will never learn from them – and that will be our real failure.  I absolutely love Thomas Edison’s perspective on failure, “I have not failed. I’ve just found 10,000 ways that won’t work.”

You can help me to create the distinction between failures and mistakes by sharing this perspective with others!  If you disagree please share your thoughts in a comment!

2 replies to “Creating Common Language: The Important Difference Between a Failure and a Mistake”