I am frequently an advocate for the benefits of children playing video games.  I realize that I am somewhat of an outlier but watching my children play I have seen them building real world skills like logical thinking and problem solving.  Occasionally I will hear their pangs of frustration but I appreciate watching them strengthen their resolve as they work to overcome a task and complete an adventure.  Admittedly there can be many challenges too but for the most part I see the positives outweighing the negatives.  Until this weekend, I hadn’t really understood a negative impact of one particular type of game – the Kinect Sports games. 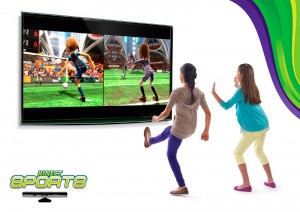 This past weekend was the annual May Day 5K race in my little suburban town.  As with most years, my family was participating in the race as a way to get a little exercise and to pay homage to the gods of spring.  This year was even more anticipated with the especially long and brutal winter we had in Minnesota.  As the date approached, we were watching the favorable weather forecast and looking forward to finding a little sunshine and warmth.  This particular “race” attracts runners, joggers, and walkers of every athletic level with the simple goal of getting the heart pumping.  Most participants weren’t expecting to win the race – or at least so I thought.

In previous years my family had walked the route and on more than one occasion we were pushing a stroller or carrying one of the kids at least part of the way.  This year was going to be different though.  For a number of weeks my seven year old son had suggested that he wanted to run the race.  On my personal runs, both he and my daughter had tagged along the first mile so I thought 5K might be a little challenging but with a few rest breaks it could be doable.  At a minimum I thought it was a good stretch goal for him.

As we made our way to the starting line my son reaffirmed with the family that he is going to run this year and not walk.  He started out aggressively by running the first ¼ mile without stopping.  As we stopped a couple of times for him to catch his breath you could see he was getting annoyed by the number of people that were passing us.  It now became clear that he didn’t want to just run the race; he wanted to win the race.

As we picked up the pace and started to run again I was trying to comprehend how a seven year old could imagine that he could win a 5K (3.1 mi) race?  There were plenty of adults, teenagers, and middle school kids in this race – all bigger, stronger and likely faster than he was.  How was it that he imagined a 2nd grader, who had never really practiced for a race, would have a chance at winning?

The truth is that these exaggerated expectations were not entirely new.  My son has always been pretty competitive – some might say at times a little too competitive.  As parents we have tried to help him recognize his competitive behavior and adjust his tone to a healthy level but we were still conscious not to quell it completely.  For the remainder of the run (which involved plenty of walking and at least a few threats to “just quit”) I was searching my thoughts for a possible cause to his delusions of grandeur.

For years I have been a proponent of video games as an opportunity for children to build perseverance and learn how to deal with failure and setbacks (see Gaming: A Refuge Where Kids Can Learn How to Fail).  After frequent discussions with other parents on the perils of academic grade inflation, 7th place ribbons, and “no score” little league – the binary option of “a win” or “a loss” in video game was a welcome change.  For the record, I am still trying to figure out who we are trying to appease with no score little league?  From my observations every single kid on the field knew exactly what the score was but we decide not to put it up on the scoreboard?

As I was thinking about the benefits of video games I wondered if there might also be a negative corollary: were some games suggesting that success can come easily?  In our house we’ve had the Kinect camera for the Xbox 360 for several years.  It really is an amazing piece of technology in that it allows the player to become part of the game by tracking their movements and rendering them as player on the screen.  With the handful of games we have purchased our kids are able to “play” almost every sport imaginable, a few titles include baseball, golf, bowling, soccer, volleyball, skiing, and track and field.

During the game the child is able to mimic the motions necessary to “win” but they never fully understand the talent and practice required to really play the sport.  They experience the thrill of victory without the required dedication or struggle that comes from working to master a real sport.  They never have to log their 10,000 hours of practice as author Malcolm Gladwell suggests in his book Outliers.  Now there definitely is a positive element to these games in the form of physical exercise.  It is great to see them off of the coach and moving, especially during the long indoor months of Minnesota’s winter.  The challenge comes in reinforcing the fact that their proficiency in the game doesn’t translate back into the real world.

So back to the 5K race – we did finish with a time of 37 minutes and 30 seconds which he and I both felt was quite respectable.  Along the route we worked on focusing on short-term goals like making it to the stoplight instead of “finishing the race” and that seemed to help.  We also talked about where he might finish amongst the 2nd grade racers which seemed to take some of the sting out of not winning.  We are far from having resolved this challenge of unreasonable expectations entirely but we are definitely on a healthier path.

Just maybe this will be the spark for his resolve to join me on a few more runs this summer?